The U.S. will require foreign visitors to be vaccinated in phased reopening of the country. Getty

It appears that the Biden administration is taking a page from the playbook Canada and other countries are using. The United States is working on a “phased approach” to reopening international travel that will require nearly all foreign visitors to the United States to be fully vaccinated against Covid-19, a White House official told Reuters.

The Biden administration has interagency working groups working “to have a new system ready for when we can reopen travel” that includes “a phased approach that over time will mean, with limited exceptions, that foreign nationals traveling to the United States (from all countries) need to be fully vaccinated,” according to the White House official.

This sounds a lot like what Canada is doing. Next Monday, as part of a phased reopening, Canada will open its border to fully vaccinated American citizens and permanent residents, more than 16 months after closing to non-essential travel due to the Covid-19 pandemic. Fully vaccinated travelers from other countries will be able to enter Canada beginning September 7.

Before implementing such a plan, the U.S. has a lot of hurdles to clear. It must not only figure out what types of proof of vaccination it will accept, but whether it will accept vaccines that are authorized in some countries but not in the U.S..

Even more tricky will be how to process travelers’ proofs of vaccination quickly and efficiently, without causing huge queues at airports and land crossings. Most European countries have been using the Digital Covid Pass since July 1.

To enter Canada, travelers must use the government’s ArriveCAN “vaccine passport” app, which allows uploading passport information as well as Covid-19 vaccination records and PCR test results. Once the information has been entered, the ArriveCAN app provides the traveler with a receipt with a digital code that must be shown to officials at the Canadian border.

The beauty of a digital system like Canada’s ArriveCAN is that a border official can easily and quickly see whether a traveler has been cleared for entry. This not only speeds the processing of all arriving travelers at airports and land crossings, but it allows Canada to do contact tracing in the event of breakthrough cases.

At this time, the United States has no “vaccine passport” and no national digital system for processing travelers’ vaccination records. Instead, the government has left it to airlines and other businesses to figure out how to navigate this quagmire.

Nearly four dozen international airlines have adopted the free Travel Pass, which is backed by the International Air Transport Association. Both British Airways and American Airlines use an alternative solution called VeriFLY.

Those types of digital solutions could presumably be adapted for travelers arriving to the U.S. by plane. It remains unclear if or how the U.S. would ensure that visitors arriving by land from Mexico and Canada show proof of vaccination status before entry. 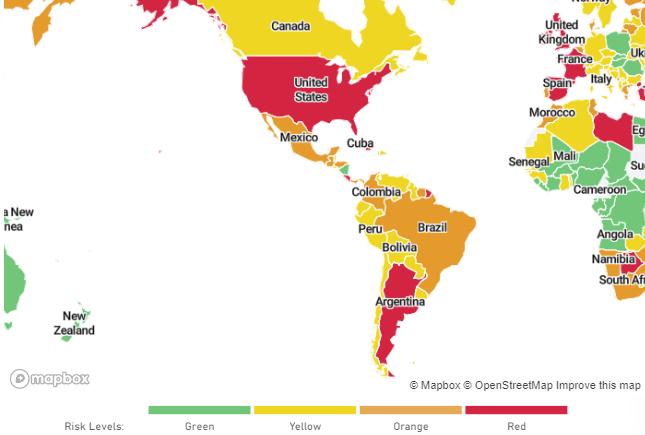 The U.S. is currently a Covid hot spot. Brown School of Public Health

Ironically, the U.S. State Department currently bans foreign travelers coming from many countries with lower rates of infection than the United States.

Right now, the U.S. is among the top hot spots in the world, and is reporting higher overall infection rates than both Canada and Mexico as well as India, China, South Africa, Brazil and other nations on the U.S.’s “banned” list, according to data from the Brown School of Public Health.

Interestingly, the Biden administration’s plan may play particularly well with unvaccinated Americans, the majority of which blame travelers for the current surge in infections in the United States.