As of this week, 70% of the adult population in the United States have received at least one dose of a COVID-19 vaccine. While this progress represents a marked achievement in vaccinations that has led to steep declines in COVID-19 cases and deaths, vaccination coverage—and the protections provided by it—remains uneven across the country. With the growing spread of the more transmissible Delta variant, cases, hospitalizations, and deaths are once again rising, largely among unvaccinated people. While White adults account for the largest share (57%) of unvaccinated adults, Black and Hispanic people remain less likely than their White counterparts to have received a vaccine, leaving them at increased risk, particularly as the variant spreads.

Reaching high vaccination rates across individuals and communities will be key for achieving broad protection through a vaccine, mitigating the disproportionate impacts of the virus for people of color, and preventing widening racial health disparities going forward. The Centers for Disease Control and Prevention (CDC) has indicated that vaccine equity is an important goal and defined equity as preferential access and administration to those who have been most affected by COVID-19.

The CDC reports demographic characteristics, including race/ethnicity, of people receiving COVID-19 vaccinations at the national level. As of August 2, 2021, CDC reported that race/ethnicity was known for 58% of people who had received at least one dose of the vaccine. Among this group, nearly two thirds were White (59%), 10% were Black, 16% were Hispanic, 6% were Asian, 1% were American Indian or Alaska Native, and <1% were Native Hawaiian or Other Pacific Islander, while 8% reported multiple or other race. However, CDC data also show that recent vaccinations are reaching larger shares of Hispanic, Asian, and Black populations compared to overall vaccinations. Twenty-six percent of vaccines administered in the past 14 days have gone to Hispanic people, 4% to Asian people, and 15% to Black people (Figure 1). These recent patterns suggest a narrowing of racial gaps in vaccinations at the national level, particularly for Hispanic and Black people, who account for a larger share of recent vaccinations compared to their share of the total population (26% vs. 17% and 15% vs. 12%, respectively).  While these data provide helpful insights at a national level, to date, CDC is not publicly reporting state-level data on the racial/ethnic composition of people vaccinated. 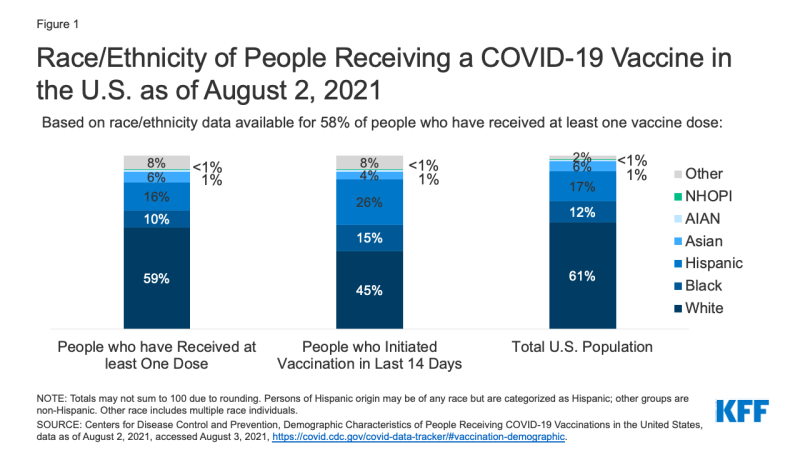 Distribution of Vaccinations by Race/Ethnicity

Figure 2 shows the shares of COVID-19 vaccinations, cases, and deaths among Black, Hispanic, Asian, and White people. The data also show the distribution of the total population by these groups as of 2019. Data are not presented for other groups due to data limitations. Together these data show: