Francis Collins, director of the National Institutes of Health (NIH), announced his resignation on Tuesday, just weeks after documents exposed that he made “untruthful” comments about U.S. federal funding of gain-of-function research at the Wuhan Institute of Virology.

“It has been an incredible privilege to lead this great agency for more than a decade,” Collins said in a statement posted at the NIH website.

I love this agency and its people so deeply that the decision to step down was a difficult one, done in close counsel with my wife, Diane Baker, and my family. I am proud of all we’ve accomplished. I fundamentally believe, however, that no single person should serve in the position too long, and that it’s time to bring in a new scientist to lead the NIH into the future. I’m most grateful and proud of the NIH staff and the scientific community, whose extraordinary commitment to lifesaving research delivers hope to the American people and the world every day.

Just weeks before this announcement, Richard Ebright of Rutgers University accused Collins of making false public statements about National Institute of Allergy and Infectious Diseases (NIAID) grants to the Wuhan Institute of Virology (WIV), which have since been proven to fund the study of “chimeric SARS-related coronaviruses” which “could infect human cells.” Ebright said bluntly that Collins had not told the truth when asked about this research: “assertions by the NIH Director, Francis Collins, and the NIAID Director, Anthony Fauci, that the NIH did not support gain-of-function research or potential pandemic pathogen enhancement at WIV are untruthful.”

Appointed by President Obama in 2009, Francis Collins made history by becoming the longest-serving NIH director and one who also served in three administrations: Obama, Trump, and Biden. Prior to his tenure at the NIH, he founded The BioLogos Foundation, which aimed to bridge a dialogue between science and religion. In 2007, former President George W. Bush awarded him the Presidential Medal of Freedom for his work on the Human Genome Project.

During the coronavirus pandemic, Collins frequently appeared on television where he advocated for children wearing masks in schools while blaming unvaccinated Americans for the pandemic’s continuation.

“This is not a political statement or invasion of your liberties. This is a life-saving medical device. Asking kids to wear a mask is uncomfortable, but kids are pretty resilient,” Collins said in August as children were gearing up to go back to school.

“If we don’t have masks in schools, this virus will spread more widely. It will probably result in outbreaks in schools, and kids will have to go back to remote learning, which is the one thing we want to prevent,” he added. 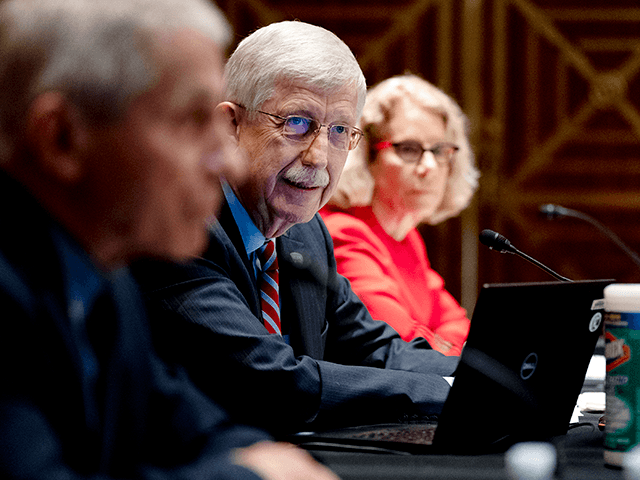 Speaking with Religion News Service in September, Collins advised religious Americans hesitant about the coronavirus vaccine to think of it as a miraculous answer to their prayers.

“For somebody who’s a believer, this is what you could call an answer to prayer,” he said. “If we’ve all been praying to God to somehow deliver us from this terrible pandemic, and what happens is these vaccines get developed that are safe and effective, well, why wouldn’t you want to say, ‘Thank you, God’ and roll up your sleeve?”

As to exactly what prompted Collins’ reported departure in the middle of the pandemic remains unclear as of this writing. As Politico noted, Collins recently supported the U.S. Food and Drug Administration’s (FDA) decision to limit booster shots for Americans 65 and older as well as other vulnerable demographics, which contradicted the Biden administration.

“This is the way it ought to be,” Collins said on CBS. “Science sort of playing out in a very transparent way, looking at the data coming from multiple places, our country, other countries, and trying to make the best decision for right now.”

The Biden administration had originally advocated for booster shots for all Americans eight months after being fully vaccinated; the FDA’s decision was largely interpreted as an assurance to the public that science was guiding the agency’s decision-making, not politics.

In 2017, the NIH under Collins’ leadership ended a three-year moratorium on gain-of-function research, which aimed to make “pathogens more potent or likely to spread in people.”

“More than 3 years after imposing a moratorium on U.S. funding for certain studies with dangerous viruses, the National Institutes of Health (NIH) in Bethesda, Maryland, today lifted this so-called ‘pause’ and announced a new plan for reviewing such research,” Science.org reported at the time.

“Such studies could help experts prepare for pandemics, but pose risks if the souped-up pathogen escapes the lab,” the report added.

This past September, The Intercept reported on several grants that the National Institute of Allergy and Infectious Diseases (NAID) — one of the 27 institutes governed by the NIH — awarded to EcoHealth Alliance for gain-of-function research at the Wuhan Institute of Virology in China:

Gary Ruskin, executive director of U.S. Right To Know, said the documents obtained by The Intercept provide “a road map to the high-risk research that could have led to the current pandemic.”