‘I don’t see a difference in a child four years and five years, except for the age – the immune system works the same’.

After the federal Food and Drug Administration (FDA) delayed authorization of the Pfizer-BioNTech COVID-19 vaccine last week for children under the age of five in the United States, parents are making a passionate plea for its off-label use, according to a recent Guardian report.

Last summer, the American Academy of Pediatrics (AAP) advised against off-label use for children under the age of 12, said 2021 AAP President Dr. Lee Savio Beers in a statement.

“The dose may be different for younger ages. The AAP recommends against giving the vaccine to children under 12 [years] until authorized by the FDA.”

And when health care providers sign an agreement to administer the vaccines, they agree not to provide the vaccine for non-authorized indications, such as off-label use, the report said.

“If providers were to give it to these children, they could lose their status as a vaccine provider,” Dr. Sean O’Leary, pediatric infectious diseases specialist and vice-chair of the AAP’s committee on infectious diseases, recently told the Guardian.

The 10-microgram vaccine authorized for kids five to 11 has not been studied in younger children, who receive a 3-microgram dose in the Pfizer-BioNTech pediatric trial, so it’s possible children younger than five can have more side effects if they receive the higher dose, according to the Guardian.

But the paper noted some parents and physicians argue the clinical trials have already demonstrated the 3-microgram dose is safe in young children.

“I don’t see a difference in a child four years and five years, except for the age – the immune system works the same,” said Dr, Wolfgang von Meissner, a family doctor in Germany.

But after Pfizer-BioNTech discovered the omicron variant led to a higher rate of infection than previously documented in younger patients in their clinical trial, they requested a delay to authorize it because of the variant’s ability to evade the immunity provided by the two-dose series of the vaccine, according to the New York Times. 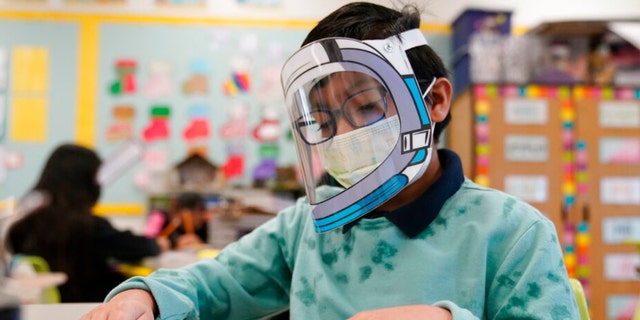 FILE – A student wears a mask and face shield in a 4th grade class amid the COVID-19 pandemic at Washington Elementary School on Jan. 12, 2022, in Lynwood, Calif. Gov. Gavin Newsom delayed a closely watched decision on lifting California’s school mask mandate Monday, Feb. 14 even as other Democratic governors around the country have dropped them in recent weeks. (AP Photo/Marcio Jose Sanchez, File)

The paper noted that December data from the clinical trial showed children between the ages of two and four only produced 60% of an antibody response when compared to the antibody response of older teenagers and young adults, a group which is used as benchmark to document effectiveness of the vaccine.

In contrast, children ages 6 months to two years old developed an antibody protection that met the study’s goal without safety concerns, but the dose used for these children was one-tenth of the dose given to children 12 years and older, the Times added.

In Germany, however, Von Meissner has administered 2,500 vaccines to children between the ages of six months to five years old, because even though the vaccine is not approved for children under the age of five in the country, there is no restriction for its off-label use as in the United States, according to the Guardian.

“I don’t see why I shouldn’t protect little kids,” he said. But he cautioned it’s important to inform parents of the risks of a non-approved vaccine for an off-label use before administering it.

“They need to understand, and then they need to make the decision,” he added.

Von Meissner said expanding the vaccine to an off-label use in the U. S. would give additional protection to families, some of whom become so desperate as to lie about their children’s ages so that their children can qualify for them, but this is strongly advised against by experts, per the report.

The paper noted another alternative for more children to get vaccinated could be if the Pfizer-BioNTech trial included more kids under the age of five in their clinical trials, which would also provide more data.

For example, since the 3-microgram dose was only effective in children between the ages of six months to two years, but not in children two to five years old, the trial could divide all the participants under the age of five into different age subgroups and test different doses in each subset, per the report.

The paper suggested another way to increase availability is to make the shots available for very high-risk children through the FDA’s expanded access program.

Fatima Khan posted a petition on change.org to Dr. Janet Woodcock, director of FDA, Center for Drug Evaluation & Research, stating: “We are the parents, caregivers, and loved ones of children under 5, and we urgently ask you to make life-saving COVID-19 vaccines accessible to this age group.”

“Many of us have children too young to remember a life before the pandemic. We have birthed babies, raised newborns, and cared for toddlers and preschoolers, all while striving for the impossible balance between our children’s physical and emotional well-being.”